In 1661, Louis XIV asked Colbert to restore the naval power of France, because the Portuguese, Dutch and English were controling the trade of Asia (silk, porcelain, spices ...). These exotics are now indispensable to Europeans.

Colbert founded the East India Company in 1664. Port Louis is the home port and the East is being built gradually. But the Dutch war, the League of Augsburg and certain business operations resulting in the disastrous collapse of the company who must rent their privileges to traders known "as the most significant of the Kingdom: The Gentlemen of Saint Malo. Danycan resumed trade with Peru for its "Company of the South Seas."

The East India Company shall enjoy the exclusive privilege of trade in all seas of the Indies and beyond the line of Bourbon Islands and France. 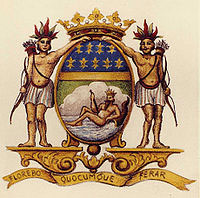 Saint Malo is now one of the largest ports in France by the number of vessels and the wealth of its owners who founded the "India Company of St Malo. Despite the unquestionable success of the gentlemen of St. Malo (Dupleix, La Bourdonnais ...), they fail to redress the Company. In addition, the regent in 1715 denied them the privilege of Commerce of the East India Company. Law Took it over in 1719. He then founded the perpetual India Comany (1719-1769). But in 1721, it is bankrupt. Law's system, built on the issue of paper currency, collapses.

Saint-Malo remains a major commercial center and is home to one of several regional chambers comprising the shareholders of the Company (Paris, Lyon, Nantes, Bordeaux ...) Between 1725 and 1740, the East India Company is thriving. In town, wealthy merchants built homes and mansions. Ships reported in their holds cottons and silks from India, tea, china ...)

But wars of Austrian Succession and the 7 Years War deprive the Company's operating territories and cause financial ruin. Louis XV decided to suspend the Company monopoly in 1769. In 1793, the French Revolution stopped one last attempt to create a new East India Company founded in 1785, suspected of anti-revolutionary activities.